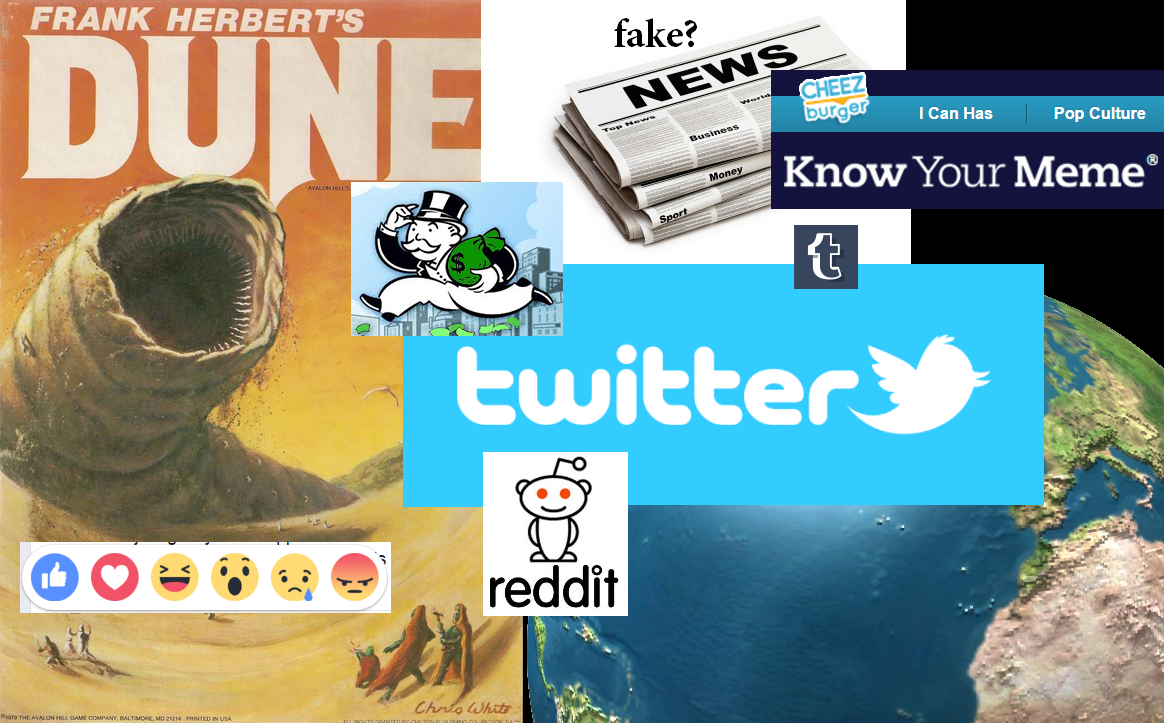 At some point as I reposted yet another well-intentioned political infographic or article I realised how disingenuous it all is. I’m very left-leaning, and so are about 99% of my friends in my newsfeeds on every social media platform. So constantly sharing memes and and reblogging posts that show how liberal and progressive I am (which is what a lot of people do) is actually quite immature. Sharing memes doesn’t actually help or inform anyone, especially when you have a pretty homogenized friend group. If I post a news article to Facebook, that same story has already been passed around my friends list ten times over. That is why as of this week I’ve decided to limit the about of articles I share, and focus on sharing links to active things like thesixtyfive.org, 5calls.org, and sharing gofundme pages for the victims of hate crimes and other charitable causes. Links like that provide an actual, tangible way to use social media to actually help people and change things, rather than just give you the appearance of a moral person. Witty Facebook statuses and tweets and Tumblr posts don’t save lives, all that that kind of virtue-signalling does is cultivate a shallow sense of morality.

Another important thing to remember about social media is the fact that, as with any free-to-use piece of internet infrastructure, the site is not the product—you are.  Facebook and Twitter have admitted to testing their algorithms in such a way to see that if displaying links and articles in a particular order could alter their user’s moods (Sources: 1, 2, 3, 4). The entire point of advertizing is to play on people’s emotions. Anger and fear are good and necessary emotions for the survival of any mammal, humans included. However, if you let yourself feel powerless thanks to your Facebook and Twitter newsfeeds, then you are playing right into the hands of the corporations trying to sell you shit to make you feel less miserable. It is important to feel anger at injustice, but it is also important to examine your feelings and not let them debilitate your from productively opposing the things that make you angry. Be sure that your anger and fear is not tailored for you by companies and organizations who thrive off manipulating your emotions by creating manufactured reactions.

Productive anger is a powerful force. It is also something I consider as a sort of flag between serious Morrigan devotees. The phrase “productive anger” tends to come up organically in private conversations with newer initiates. This isn’t some great secret, we’re not an organized mystery cult, but productive anger is the inevitable result of some of Her lessons. Anger that cannot be channeled and directed at an offending source in such a way that the anger can be sublimated is not productive anger. Anger that can’t be used to better a situation will get turned inwardly and become despair. Despair and hopelessness is the “self destruct” button of a warrior and is rooted in fear. Not the productive kind of fear that helps animals evade predators or natural disasters, but the fear that cripples the animal so it is unable to move or act in the face of danger.

I’ve recently started reading Frank Herbert’s Dune at the behesting of spirits and synchronicity, and I find the The Litany Against Fear to be a useful meditation in these troubling times:

“I must not fear.
Fear is the mind-killer.
Fear is the little-death that brings total obliteration.
I will face my fear.
I will permit it to pass over me and through me.
And when it has gone past I will turn the inner eye to see its path.
Where the fear has gone there will be nothing. Only I will remain.”

Though it is considered cliché to quote, I find that dwelling on it when I find myself in the midst of a surge of panic or a PTSD flashback is quite helpful. My spiritual path does not make me immune to panic. In fact, many on the warrior path, many devotees of the Morrigan, came to this path after already suffering trauma. Many of us were brought here because we had lost previous battles, not because we are some invincible fighters. Even with the gnosis from the initiations that I have already received I still go through bouts despair and crushing feelings of powerlessness. Last year it got so bad that I  cut off my own hair (I’m sure you have seen enough movies to infer the symbolism there):

From July 8, 2016:
“…My PTSD symptoms are flaring up in a way that they haven’t since my teens. Lately any kind of adrenaline reaction creates a painful energetic feedback loop between my heart and stomach and next thing I know searing pain shoots down my body and my muscles go rubbery and I can barely move…and that’s the opposite of what *should* happen. Usually, in a dangerous situation, my adrenaline spike creates clairsentience and allows me to react faster and perform feats of unusual strength and speed. It is an ability that I sometimes refer to as “shapeshifting” because the Morrigan taught me to control/override my parasympathetic nervous by visualizing my astral body transforming into a wolf. But for the past few months it’s been spotty. I often just as powerless as I did before initiation. The powerlessness is even worse in crowds, when I’m around people I experience an overwhelming fear of rejection, my self esteem plummets and I get paranoid that people will “find out” I’m “broken”. This is all stuff I thought I moved past years ago.
What’s even worse is I’m having these almost flashback-like things. I’ll look at a person, their face, and suddenly they look like one of my abusers or attackers from years ago…and my heart jumps and I take an energetic punch to the solar plexus. These facial triggers are totally random. I’ve had them before from time to time, but only when someone really, *really* looks like someone who beat/abused me.
At night I can’t fall asleep, even when I take melatonin. If I hear a noise that sounds like someone trying to break in I feel like my spirit *literally* tries to “jump out of my skin.” When I do sleep I sometimes have guilt-ridden dreams about the past.
I’ve been hiding this for months, even glossing over these issues with my own partner because I don’t want people to worry or to see me as weak. I feel like I’m letting down people who look up to me and seek counsel from me because my own healing progress has regressed. I’m ashamed and paranoid that people will find out and somehow use that knowledge against me.
I don’t know what started it, or even if it was just one thing. There are a lot of stress factors in my life lately contributing to my anxiety and feelings of powerlessness. Getting shot at near my own home a couple months ago probably didn’t help, but I feel like the powerlessness I feel from my financial state right now is also a factor.
This crippling fear, and energetic blockage is affecting my magic as well. I feel cut off from my higher self, my gods, and my ancestors. I can’t invoke, when I try nothing happens, like the space inside me for higher spirits to reside is locked.
My hair, which was getting close to halfway down my back, got really unhealthy, prone to matting, breaking, and falling out during this emotional relapse that I’ve had. My hair is a huge part of my self-image, and also personally significant to my relationship with the Morrigan. I used to braid crow feathers and snake vertebrae into it. Less than 48 hours ago I cut pretty much all of it off. I’ve been told that hair is tied to memories and, frankly, technically the unhealthy parts were actually weighing down the new growth, so it was the only way to save it. I really didn’t want to do it though.
I feel so useless, and I feel like I’ve regressed from being a warrior to being a burden to my peers. I want to help people, but I’ve become unable to help myself…”

During this time I’ve learned a lot about myself, my past, my emotions, and the present.

The prophetic gift is often as much a curse as it is a blessing. As much as I roll my eyes at people using the word “psychic” and “empath” interchangeably, I can’t deny that the ability to perceive people’s emotions and future outcomes is a form of empathy, or at least involves a level of empathy. Meaning a spiritually sensitive person will be able to feel other people’s emotions—often to their own detriment. This can drive a seer to have very conflicted emotions towards their fellow humans. On one hand, you see people make the same preventable mistakes over and over again in such a way that their bad decisions begin to affect others, and it makes you so misanthropic that you want to take up a hermitage in a cave or cabin in some remote wilderness in order to achieve some physical and emotional distance. On the other hand, you want to use your perceptive gift for good and help save people from themselves, and seek the company and trust of your fellow humans so that they might listen to your advice. These conflicting attitudes of wanting to help humanity and despising their incorrigibility and wanting to let it all self-destruct are just one set of paradoxical emotions I’ve been struggling with in recent months.

Just as it is vital to let the fear pass over you in order to function, you must also acknowledge that you cannot directly change the feelings and actions of others. Once you identify the things that you don’t have power over, you can then accept the fact that you don’t have power over them and let the feelings of powerlessness pass over you. Once you cease wasting emotional energy on the things that you cannot affect, you can begin focusing on the things you can. If you can keep your anger focused and productive, you can use the heat of it to forge a steel resolve with which to defend what you believe in…if you do not focus your anger it will burn you up from the inside.

While I’ve been typing and editing this for several days the sounds of military aircraft from a nearby base have been assaulting my ears and shaking my apartment. I often suspect that they fly low like that over this neighborhood on purpose—they do it in other countries. The powerful always do their best to keep the poor frightened and confused. This is just another reminder that not all the anxiety we feel is our own.

Here are a couple of links to articles about maintaining your emotional and mental health while staying informed: