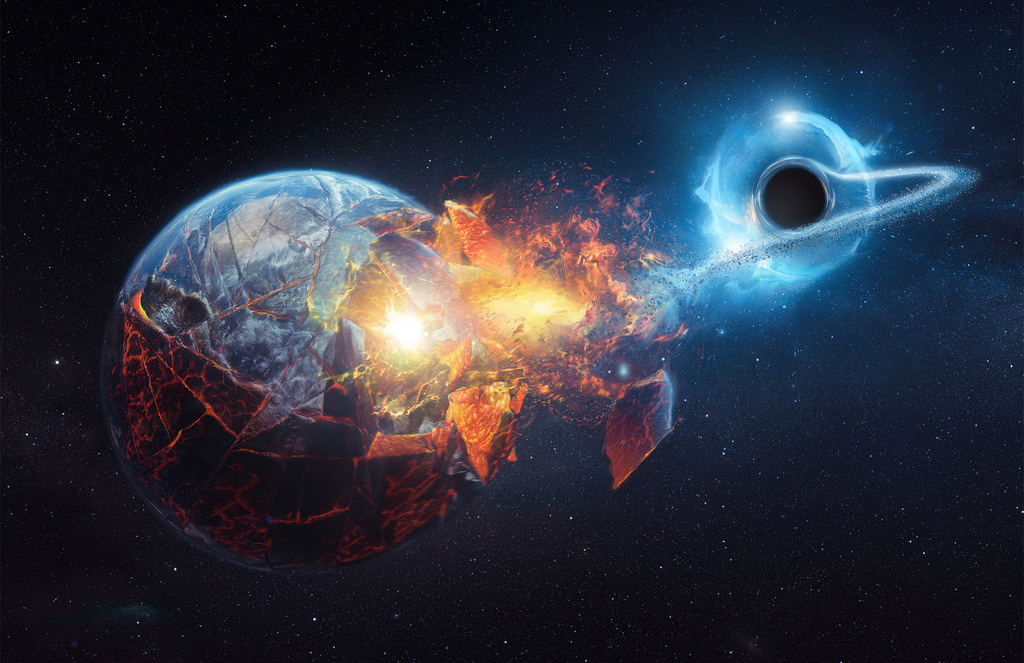 [Image: “Black hole passing by Earth” by Martin/hipydeus on Flickr]

Happy Summer Solstice to you all! Sorry for the long absence. 11 months ago I got a new job, new living quarters, and had a breakup with an old partner—all at the same time (all in the same week). I’ve taken the past almost-year to really buckle down and focus on my goals, both mundane and spiritual. During this time I’ve engaged in some of the most intense ritual work of my life. This stream-of-consciousness sort of post is a glimpse of some of my thoughts regarding my results in this work.

The longer I’ve been with my gods the more terrifying I realize they are. The Cailleach, The Morrigna, Méche MacMorrigan—they’re old, so old, older than the Tuatha de Danann or Aos Sí, and I’ve always known that. But “knowing” something mentally and academically is so much different than “realizing” or “understanding” in a deep, intimate sense. As I’ve progressed in my ecstatic invocations and rites in order to gain that understanding I’ve come to realize why old gods the world over are often referred to as “giants”. While the word giant may just evoke a mental image of a large humanoid being, giants in a spiritual sense are so much more—titanic—in the truest sense of the adjective. Consider what the Norse Jötnar, the Sumerian Annunaki, or the Greek Titans embody: the ancient forces and concepts of nature and reality on which the material world—the world we live in—is built.

Often the New Gods, in their respective mythologies, go to war with the Old Ones to make the world less chaotic and more livable, and go on to become the patrons of humans. But the old gods, even the ones whose bodies get torn apart, they never really die, do they? And then there are the prophecies of the Apocalypse where the Old Ones return to fight again…but I digress. My point is that the closer I get to my gods the more Lovecraftian they seem. A dragon may look like a lizard from far away, but the closer you are to something the bigger it will appear. The ancient forms of divinity that ruled before more comprehensible, human-favoring gods are so vast, writhing, and shadowy in their scope and scale.

Does it not follow that the world-eaters must be bigger than the world? How lucky we are that The Morrigan is the mistress of shapeshifting so that she can take on forms we mortals can easily recognize! How cosmically large must She in all her multiplicity be if She birthed the Great Serpent that may engulf our entire perceived reality? My heart swells with love and pride to think about Her power and I say “Look, She is Death and She is Beautiful and I Love Her!” And with that love of Death, that love of Chaos and Passion, comes a love for all monstrous beings.

I love Méche, Her son with an affection that I’ve seldom ever felt for a male entity—human or spirit. His terror fills me with awe and reverence in a way no other god ever has. The Morrigan is, naturally, as a goddess of prophecy, also a goddess of dreams and nightmares (Macha clearly paralleling the folkloric Night Mare), but Méche is, in my experience, a god of the deep subconscious, fever dreams, and abstract fears. To love, adore, and find beauty in the face of one’s most latent phobias is an odd choice to make, but in light of such power and magnitude, how could I, as a sorceress and lover of power, not admire such awesome might? Does my admiration at times look or feel more like fear than ecstasy? Yes, in fact, it is both fear and ecstasy.

In many ancient cultures the chthonic gods were not worshipped and invoked directly, it was advised to propitiate, appease, and avoid those that are death, chaos, plague, and the like. “Bless and keep the monstrous gods…far away,” was the preferred mode of addressing the Old Ones. But sorcerers do not wish the dead to stay in the ground, nor dead gods to stay chained, and so there there have always mad ones like myself that invoke those who should not be.

When I was a child my favorite story book was called “Blue Moon Mountain” and it was a tale about one young girl who took a legendary path that only appears “once in a blue moon” to the land of mythical beasts and monsters, and when she arrived so filled with wonder she insisted that they all were beautiful, even the most fierce and terrifying of creatures among them. The monsters thought she was crazy, but they were also touched by her youthful enthusiasm and compassionate nature. The beastly gods and demons whom are loved the least by humanity are, in my opinion and experience, the most beautiful in their unique and alien nature because they differ so greatly from humans and human understanding.

The ugliest and most cruel deeds done between creatures are done between humans—and those deeds are done by choice! I cannot condemn a god of plague for existing, it is his function. However, a human who would willfully deprive another human of medicine to prevent plague, now that is truly evil! True evil is born of humans, not devils. So I love devils in their honest forms because a monster is a being without pretense. This is why I love wrathful gods, and if you have read this far, you may be one who loves them as well.

You may ask when faced with such wonder and vastness how a being so immense ever reciprocate the love a mortal may feel for it. Consider this: are you not also a complex sentient being whose galaxies of neurons birth entire populated worlds in dreams that melt into apocalyptic oblivion when you, their creator, awakes back to your human life? Have you never loved, or witnessed the love a human has for a pet animal, even a non-mammalian one? Does the human not insist on the sentience and emotional capabilities of their pet, though many consider it a “lower” life form? Of course your gods can love you, of course they can acknowledge you!

Any conscious forms can have an emotional bond with each other, no matter their differences in the expression of their consciousness. Their love sometimes feels like fever or poison, like burning or dying, like the adrenaline rush under water when you realize you’re drowning, like the existential panic attack of a psychedelic trip gone dark and morbid, like the orgasm that is so intense it feels like it is morphing into cardiac arrest, the ecstasy that is nearly indistinguishable from anguish…but devotees of such mysteries come to know that those who die before death will never really die.

And so my love of my gods in all their horrifying splendor has become a compulsion, a passion more ardent and obsessive than any romance, a familial bond stronger than any shared blood, a covenant as wordlessly understood as a smile, and it only grows with time. Despite how it may sound, this is not some transcendental treatise, or some weird from of monism in a pagan hat. The point is that the seemingly unknowable can be intimately knowable. While death itself, as an experience, is literally the transcendence of physical form, the gods of death, dreams, chaos, the underworld, etc., are present, tangible, and approachable. A hurricane may be miles wide, and the storm may last for days, but you may still feel the wind and rain on your skin and live—a brief exposure to a fraction of something larger may not kill you.

Can you hear the voices of beasts in the howling of the wind? Do you feel the footsteps of the giants in the trembling of the Earth? Can you feel the tears of serpents in the rain? Can you smell the blood of dragons in the fire? The Old Ones are saying they are here. They are saying they never left, they never died, and that they are that which can never be defeated. Those who can hear them will never forget the terrible beauty of their sound and will be forever haunted.